WHAT: Since joining the Los Angeles Board of Water and Power Commissioners in May 2017, Commissioner Aura Vasquez established office hours to meet one-on-one with community members and stakeholders following the second board meeting of each month. This month, Commissioner Vasquez’s office hours will take place at LA Councilmember Joe Buscaino’s Field District Office in […] 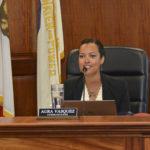 An LADWP Commissioner is offering a new way to connect with your Los Angeles Board of Water and Power Commissioners, which meets regularly on the second and fourth Tuesdays of each month at 10:00 a.m. at the LADWP Headquarters in Downtown LA. Since joining the LADWP Board in May 2017, Commissioner Aura Vasquez established office […]

May 31, 2018 The Los Angeles Department of Water and Power (LADWP) is recommending that the previously approved repowering of Intermountain Power Project (IPP) pursuant to binding renewal contracts be scaled down in size. If ultimately approved by all 35 IPP participants, the Alternative Repowering will further reduce greenhouse gas emissions 30 percent, when compared to […]