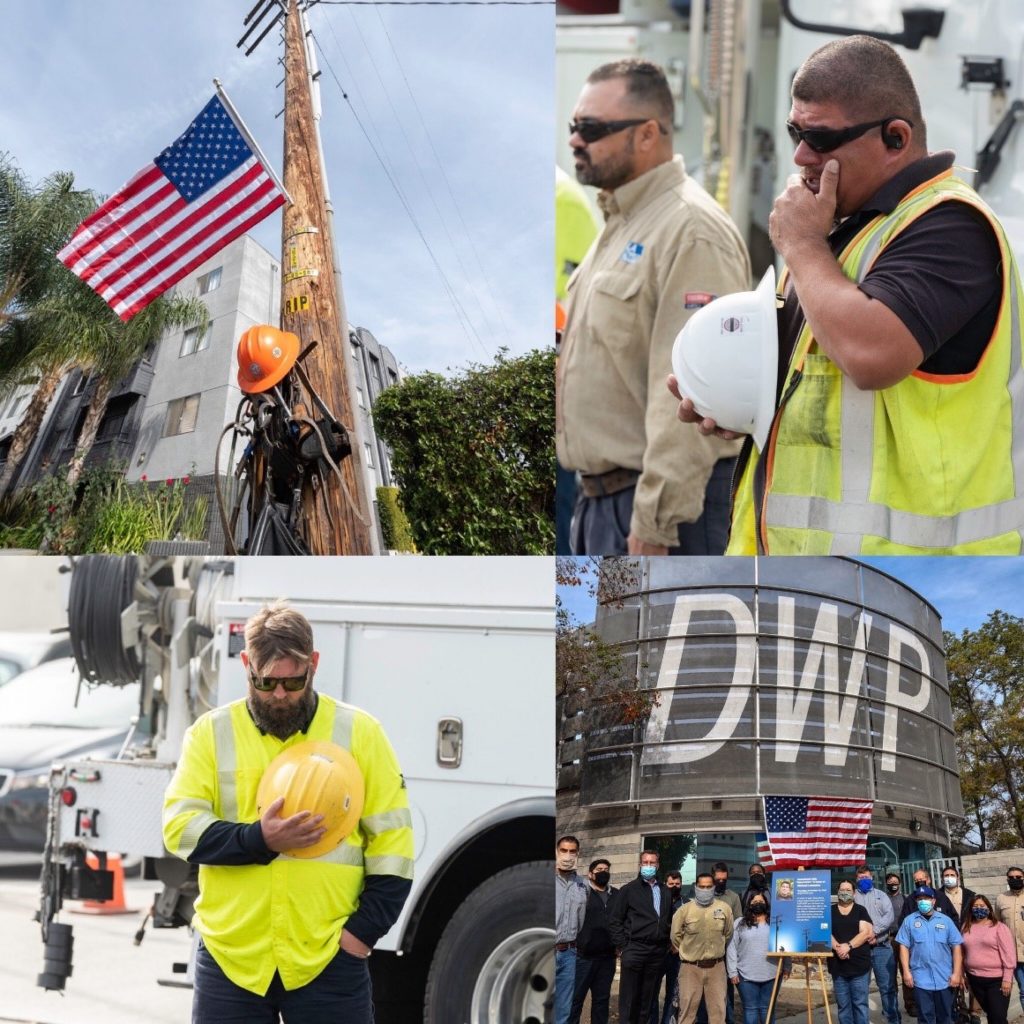 To download B-ROLL and still images of Thursday’s LADWP department-wide “Stand Down” for use in your news broadcast or online: https://vimeo.com/647533819. Please include courtesy to LADWP.

LOS ANGELES (November, 19, 2021)—Work at all job locations halted across Los Angeles Department of Water and Power (LADWP) for five minutes, from 10:52 a.m. to 10:57 a.m. on November 18, 2021, as the department paid tribute to Michael “Mike” Lemestre, a member of its Power System team who died in the line of duty two weeks ago, on November 4, 2021. The Board of Water and Power Commissioners paid tribute to Lemestre with a Special Board Meeting beginning at 10:30 AM to observe the Department-wide “Stand Down,” in solidarity with LADWP employees and labor partners.

“Mike’s sacrifice weighs heavily on many in the department because it reminds us of the very real hazards of the work that many LADWP employees, especially those out in the field, perform each day,” Board President Cynthia McClain-Hill shared during the special meeting, adding, “When tragic accidents like the one that took Mike’s life happen, we know the life of their loved ones and their coworkers will be forever changed. Though this loss is difficult and painful, the LADWP family has come together today to show our respect for one of our own and to show our support for Mike’s family.”

“Mike’s loss weighs heavily on all of us. Safety is very important to LADWP, and losing one of our own is a jarring reminder of the reality of the nature of our work. I would like our customers and stakeholders to know that this department is rich in committed, talented and dedicated public servants who are unsung heroes performing dangerous work to serve our city every day, keeping the lights on and the water flowing. We are very proud of them,” said LADWP General Manager and Chief Engineer Martin Adams. “But make no mistake, no task is and ever will be more important to this work family than our employees’ safety, no matter how committed we are to our service of this City.”

Adams had directed all employees to stop all work at all job locations on November 18, 2021 for five minutes, no matter their work locations, to honor Lemestre and remember other lineworkers and LADWP employees who have died in the line of duty, performing work in service to the city and its residents.

At a work location near Figueroa Street and Avenue 51, LADWP crews that work on overhead power lines paused their work, removed their hard hats, and bowed their heads to remember their fallen colleague. Nearby was a makeshift memorial for Mike, with an American flag, Mike’s hard hat, hung on a power pole. An LADWP water system trunk Line construction crew performing work at Robinson and Council Streets stood down in solidarity with their power system colleagues to pay tribute to Mike. Crew members as far away as the Navajo Nation in the desert southwest, and in Nevada and Arizona observed the “Stand Down” as well.

“Like thousands of IBEW members, Michael came to work each and every day in order to provide an essential service to this City, which for the most part goes unnoticed until the power goes off or the water stops flowing,” said Gus Corona, IBEW Local 18 Senior Assistant Business Manager and President. “November 4 was supposed to be just one of those days but instead, it became a grim reminder of how unforgiving this work can be.”

“For those that knew Michael best, they would describe him as a kindhearted, hardworking family man. A good man. Michael truly was a good man,” said Brian Wilbur, LADWP Deputy Senior Assistant General Manager of Power System Construction, Maintenance, & Operations. “We knew we could always count on him to take the job seriously, and to step up and do everything that was asked of him without question. He was reliable, steady, hardworking and above all a good man.”

Lemestre died on November 4, 2021 as a result of injuries sustained when he came in contact with an energized circuit in an underground vault while working as part of a cable splicing crew performing electrical service work at Terminal Island in the City of Los Angeles. His co-workers pulled him from the vault and heroically tried to revive him by performing CPR, until LAFD arrived at the scene. Paramedics transported him to the hospital but unfortunately, he did not survive.

Michelle Lemestre, Mike’s wife, joined the special Board meeting virtually and thanked the LADWP family for the support it has offered during this difficult time. “I have no words to express the gratitude we have and I just thank you so, so much for the love, care you have given us and the prayers. Mike is in heaven and I know he’s in a better place. It’s all of us that have to deal with him being gone and that’s the hard part.”

Last week, Mayor Eric Garcetti ordered that all U.S. flags in City facilities be lowered to half-staff to recognize Mike’s sacrifice, including at all LADWP facilities. His family will hold funeral services and a celebration of Mike’s life shortly after the new year.