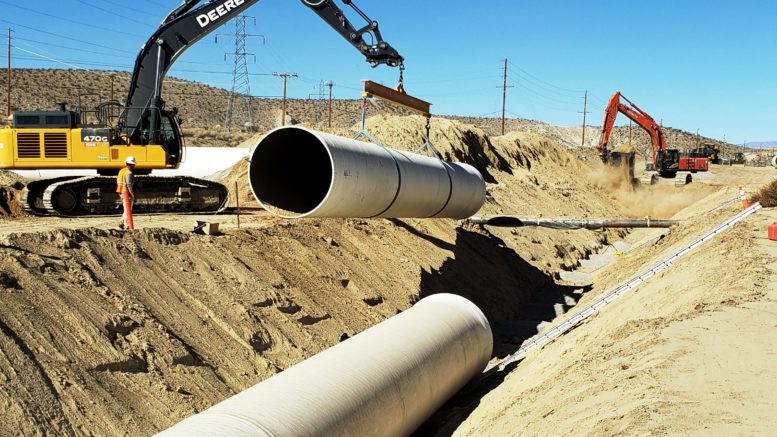 A 60 foot long, 84 inch diameter composite pipe is lower into the trench using a single 470 excavator

OLANCHA, CA (December 6, 2019) – The Los Angeles Department of Water and Power (LADWP) has received recognition for the engineering marvel of its Haiwee Power Plant Penstock Replacement Project. Originally installed in the 1920s, the gravity-fed penstock carries water from the South Haiwee Dam to the Haiwee Power Plant and is part of the Los Angeles Aqueduct system that brings drinking water 233 miles from the Eastern Sierra Nevada to the City of L.A. The project, which replaced approximately 10,000 feet of steel with fiber reinforced polymer (FRP) pipe in a remote area of high desert in Olancha, CA, was selected Regional Best Project in the water/environment category by Engineering News-Record.

The project was no small feat as all facilities and operations along the Los Angeles Aqueduct system are vital in supporting the production of hydropower and providing drinking water for the City of Los Angeles. With most of the aqueduct infrastructure built over 100 years ago, carrying out any maintenance or construction called for unique design, technical expertise, and team work.

A previously collapsed section of the penstock was restored in the 1980s, but was distorted with many long creases and folds. In the mid-2000s a third-party study determined the penstock had exceeded its service life and recommended complete replacement.

“The study gave the department good reason to proceed with this project, however, funding was a concern because replacing 10,000 feet of large diameter steel pipe in a remote area would have been very costly,” said Project Manager and Generating Station Facilities Engineer, Edward Congdon. “This gave us an opportunity to investigate alternatives, and the decision to use the lighter weight, easier-to-install material became the best technical and cost-effective solution.”

Historically, steel is the preferred material used for the aqueduct, but for the first time in the aqueduct system, the composite FRP material was used. The lighter weight pipe is designed to withstand normal operating pressure changes, as well as accommodate any sudden emergency unit shutdowns due to events such as an earthquake or wild fire. In fact, the pipe passed its first seismic tests during the Ridgecrest 6.4 and 7.1 magnitude earthquakes in July 2019.

The composite FRP material is also in line with LADWP’s environmentally-preferred product policy to promote the purchasing and use of sustainable products across operations. The carbon footprint to make composite material is much less than making steel. Also, the material does not create an environment suitable for organisms such as zebra mussels to grow, therefore, eliminating the need to flush the system with chemicals.

Also unique to the project was the coordination effort within LADWP Power and Water Systems and the collaboration with outside groups. The project’s biologically- and culturally-sensitive location in the high desert required daily meetings and continual communication with biological, cultural and archaeological experts, all of whom were on-site full-time during construction to ensure resources were protected.

“We are very proud of the Haiwee Power Plant Penstock Replacement Project, especially with the working relationship established between LADWP and the other outside organizations. This project was truly a collaborative and innovative effort,” said Congdon.