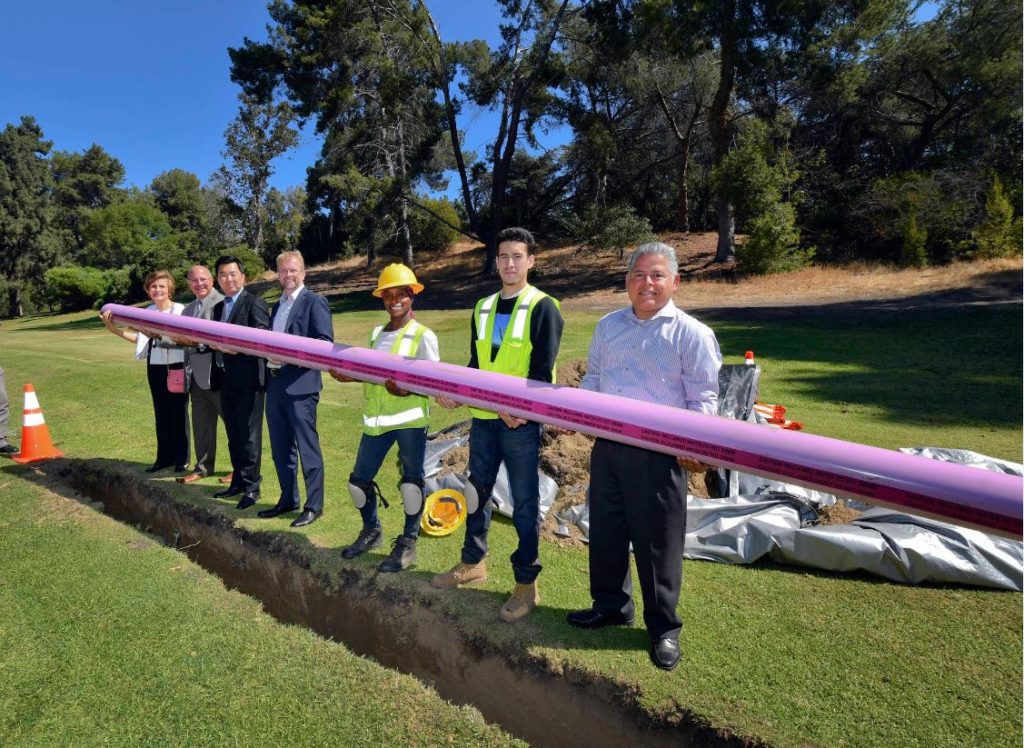 LOS ANGELES (September 13, 2018) – Councilmember David Ryu joined representatives of Department of Recreation and Parks (RAP) and the Los Angeles Department of Water and Power (LADWP) to break ground on a retrofit project at the Griffith Park Roosevelt Golf Course today that will switch its current sprinkler system from the City’s drinking water supply to recycled water. The project is made possible by an annual $3-million grant from LADWP to Recreation and Parks under an ongoing partnership. The event also highlighted the 730 million gallons of water Recreation and Parks saves on an annual basis as a result of water conservation efforts made possible through the partnership between City departments.

“The partnership between LADWP and the Department of Recreation & Parks saves our City millions of gallons of water each year, and is a huge step in building a more sustainable Los Angeles,” Councilmember Ryu said. “I’m so proud to be a part of this effort to make Los Angeles the leader in water-conscious growth.”

“Investing in partnerships with fellow city agencies like Recreation and Parks and with our customers at home is money saved on purchasing costly imported water,” said LADWP Chief Operating Officer, Martin Adams. “Water conservation is a way of life and whether it’s a city golf course converting its irrigation to recycled water or someone at home installing sustainable, California Friendly landscaping or upgrading to an efficient clothes washer, LADWP has a program or rebate to assist with that.”

In 2007, LADWP and Recreation and Parks entered into a partnership to promote water conservation by maximizing landscape water use efficiency at Los Angeles City parks which includes the repair and/or replacement of inefficient irrigation distribution systems, installation of weather-sensitive irrigation control equipment, turf reduction and the conversion of potable irrigation system to utilize recycled water.

“Today, about one third of all water used in parks comes from recycled sources,” said Recreation and Parks General Manager, Mike Shull. “With the help and support of the Department of Water and Power on projects like this here at Roosevelt Golf Course, we have been able to greatly reduce the use of potable water in our City’s parks and golf courses.”

Construction is expected to be completed by early next year.

LADWP has a suite of water conservation programs ranging from a rebate of $2 per square foot for residential and commercial landscape transformation to a recently increased rebate of $400, up from $300, for the purchase of a qualified high-efficiency clothes washer.

This year marks the 20th anniversary of LADWP’s clothes washer rebate program. To help highlight LADWP’s increased clothes washer rebate, Snyder Diamond, a local Kitchen & Bath Showroom dealer, in conjunction with Whirlpool Corporation, generously donated an efficient clothes washer for today’s event, which will be provided to a charity here in the city.