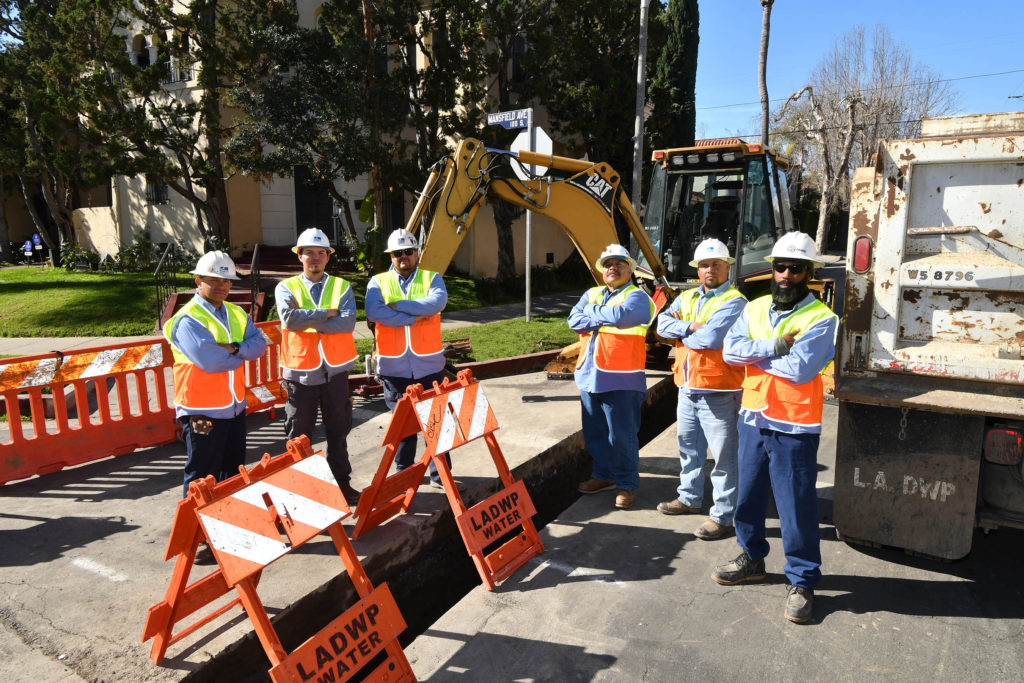 LOS ANGELES (February 7, 2022)– At a time when there seems to more bad news than good, the Los Angeles Department of Water and Power (LADWP) is proud to acknowledge a group of employees who recently performed an act of heroism that helped save a life. The individuals are members of Water Distribution’s Western District. They are:

This particular team was working in the Hancock Park area on February 1 installing mainline pipe when, during their lunch break, they noticed a car abruptly stop down the block that had just pulled out of a nearby driveway moments earlier.

Sal Perez, an LADWP Senior Water Utility Worker who has been with the Department for seven years, realized that the car, driven by an elderly man, had hit a parked car. Shortly thereafter some neighbors began tapping on the man’s car windows but the man was unresponsive and his car doors were locked.

Witnessing this scene, the group of LADWP crew members hurried over to offer their assistance. Perez called over to his fellow crew members who brought over a hammer. The group was able to break the rear passenger-side window which enabled them to access the driver’s side door, put the car in park, and pull the man out from the car.

While neighbors called 911, Robert Valdez, who has been with LADWP for four years, began administering CPR while waiting for the paramedics, who arrived in minutes. Acting without hesitation was critical, as the entire episode lasted only about 7-10 minutes.

The next day, Perez followed up with neighbors and was told the man suffered a major heart attack but was resting comfortably in a nearby intensive care unit.

This group’s quick thinking and selflessness demonstrated the very values that LADWP holds dear and their good deed deserves to be recognized and celebrated.

The quick bold actions of the six individuals embody the commitment to public service that is the backbone of the work LADWP employees perform. The department salute their efforts which serve a reminder for others to redouble their own to make a difference in the lives of the customers they serve.