*This news release was originally published and distributed by the office of Council District 13.

SEPTEMBER 27, 2021 (LOS ANGELES) – Mayor Eric Garcetti, joined by Councilmembers Mitch O’Farrell and Paul Krekorian, today celebrated the City of Los Angeles’ historic investment in a municipal solar and storage program. After $30 million was allocated for the program in the current fiscal year’s budget, the program was officially initiated in a motion co-introduced last week by O’Farrell and Krekorian.

Garcetti also capped off Climate Week 2021, organized each year on the margins of the United Nations General Assembly, by announcing that Los Angeles is signing onto the global C40 Renewable Energy Declaration, joining other cities around the world in advancing just and equitable energy transitions to combat the climate crisis.

“This is a critical moment in the climate crisis, and we have to make sure City government is forging the path toward a clean energy future,” said Mayor Eric Garcetti. “Los Angeles has one of the most ambitious green energy agendas in the world, and this commitment to invest in more renewable energy in City buildings is the latest example of L.A. leading the way on the fight to curb climate change.”

“We recently adopted the ‘LA100’ goal of 100 percent renewable energy by 2035, and I noted that this was not simply aspirational, but a work plan for a world in trouble,” said Councilmember Mitch O’Farrell, the chair of the Council’s Energy, Climate Change, Environmental Justice, and Los Angeles River Committee. “Today, we take a huge step forward. This unprecedented, coordinated investment between the Department of Water and Power and so many City agencies will transform Los Angeles. It takes leadership to steer the second-largest U.S. city and economy, and this initiative sets the standard for how municipal governments must address the climate crisis.”

“The motion we are announcing today puts the City firmly on track to realizing the goal of 100 percent clean energy by 2035,” said Councilmember Paul Krekorian, the Council’s Budget and Finance Chair. “This action is further proof that the City Council and Mayor have made an unprecedented commitment to a clean future that is a good investment in the fight against climate change, and that over time will save the City millions of dollars by directly producing power on-site.”

The O’Farrell-Krekorian motion, which was seconded by Council President Nury Martinez and Councilmembers Bob Blumenfield and Current Price, instructs the City Administrative Officer and Chief Legislative Analyst to report on recommendations for a sustainable, year-to-year municipal solar and storage program involving numerous City departments including General Services Department (GSD), Bureau of Engineering (BOE), Bureau of Street Services (BSS), the Police Department, Fire Department, Department of Transportation, Los Angeles Public Library, Emergency Management Department, and the Los Angeles Zoo. The motion also instructs that an assessment be conducted of solar generation potential at municipal facilities; that up to 25 facilities per department be identified for potential solar projects; and that various departments report on staffing and other needs to bring the program to life.

“Our department maintains over 600 buildings where, in the past five years, we saved 76 million kWh from various energy conservation projects,” said Tony Royster, general manager of the General Services Department. “With this funding, Los Angeles can continue to lead by example and implement the next phase of clean energy projects to make our buildings more resilient.”

“The Department of Recreation and Parks applauds the Mayor and City Council for accelerating our collective commitment to clean energy,” said Michael Shull, general manager of the Department of Recreation and Parks. “We look forward to equipping more of our parks and park facilities to both increase resiliency during emergencies and to demonstrate the benefits of distributed energy resources at the community level.”

“As the City Engineer, I challenge my staff every day to implement the new Green economy in our project work, our work in the public right of way, and in our services to City constituents,” said Gary Lee Moore, City Engineer. “Our organization’s vision is to ‘lead the transformation of Los Angeles into the world’s most livable and resilient city.’”

“We’ve set a course to achieve 100% carbon free power by 2035, and through the dedication and hard work of the women and men of each of our Departments, we are going to reach that goal,” said Cynthia McClain-Hill, president of the Board of Water and Power Commissioners. “The work our teams will partner on truly will transform our City’s power supply and is an integral part of building a stronger, more vibrant and prosperous Los Angeles.”

“COVID has been a harsh reminder of the importance of self-reliance and the value of connecting with our neighbors. This applies to the climate crisis, too,” said Lisa Hart, board member, Neighborhood Council Sustainability Alliance. “As the climate crisis worsens, we need to get ready, and solar plus storage helps us do right by the environment while providing sources of power in our communities that can keep cooling centers running during the extreme heat we know is coming.”

“Today’s action by Mayor Garcetti and Councilmembers O’Farrell and Krekorian shows that our leaders are willing to make the necessary investments to meet our crucial clean energy goals and put the City on a path to 100% carbon-free energy by 2035,” said Mary Leslie, President of the Los Angeles Business Council. “By installing solar and storage on municipal buildings, the City is leading by example and will prove once again that a clean energy future is good for our environment, economy, and community. This collaboration between government and the private sector will continue to advance LA’s rightful claim as the number one solar city in America and will create thousands of jobs annually, while driving millions of dollars in investment.”

*PLEASE NOTE:  E-mail correspondence with the office of Councilmember Mitch O’Farrell (including any attachments) may be subject to public disclosure under the California Public Records Act.* 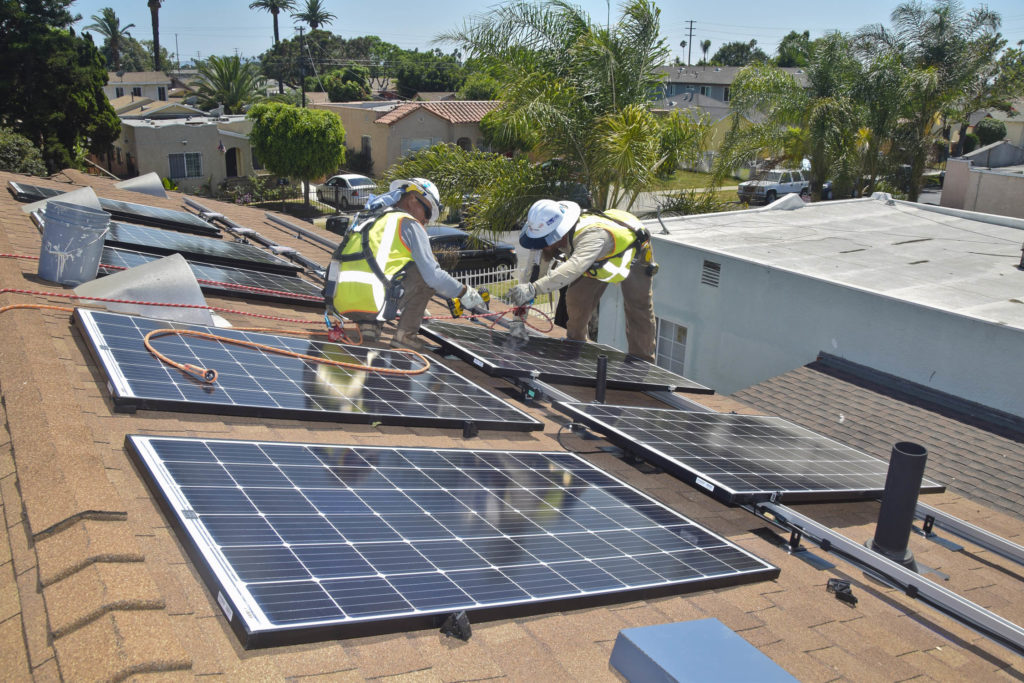 LADWP crews installing solar panels atop a roof in the L.A. area.