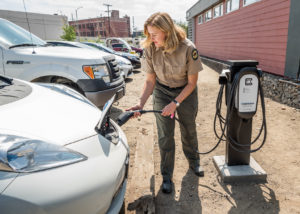 Los Angeles – Local state parks received a total of six new electric vehicle (EV) chargers through a team effort by LADWP, Energy Commission and the CA Department of Parks & Recreation. The new chargers will help visitors and park employees alike enjoy the benefits of EVs such as reducing the city’s carbon emissions, saving on fuel costs and helping integrate renewable energy into the power grid. Will Rogers State Historic Park received two chargers for public use and the LA State Historic Park near Chinatown received four public chargers for fleet and employees with three more scheduled for public use.

“California State Parks is proud to be a part of this important effort to encourage drivers to go green, which is critical to preserving our natural resources while allowing visitors to fully experience the beauty of our parks,” said Craig Sap,  Angeles District Superintendent for California State Parks. “The Angeles District currently has about 15 EV chargers throughout our parks in Southern California and we’re committed to adding another 10 chargers within the next eight to 10 months.”

The Los Angeles Department of Water and Power (LADWP) is providing up to $4,000 per charger through the “Charge Up LA!” rebate program, as match funds towards a California Energy Commission grant awarded to the “Adopt a Charger” organization to facilitate the installation of EV chargers at 12 California State Parks.

“LADWP is proud to partner with state and local organizations in the construction of the infrastructure necessary for EV adoption to really thrive,” says Nancy Sutley, LADWP Chief Sustainability Officer. “As we move towards a clean energy future, EVs will play a vital role in helping us integrate renewable energy in the LADWP power grid.”

LADWP provides rebates of up to $500 to residential customers and up to $4,000 to commercial customers through its “Charge Up LA!” program. The number of EV rebates allotted since inception is 2500. From May 2011 through June 2017, the Department has paid over $3.6 million in EV charger rebates for 2,945 chargers under the program and has helped install over 319 publicly accessible chargers at various locations throughout the city to support EV infrastructure.

Locations include areas at LA Department of Transportation, LAPD and LA Public Library facilities as well as LAX. These increases will dramatically shift public perception on the viability of EVs and the city’s support for charging infrastructure.

“The California Energy Commission is pleased to partner with the LADWP and California State Parks to help provide local access to charging infrastructure and support the state’s transition to clean, zero-emission electric vehicles,” said Janea A. Scott, Commissioner at the Energy Commission. “Transitioning to cars with no tailpipe pollution will help improve air quality and combat climate change. These new chargers are part of a growing network that provides consumers with the convenient access to places to plug in and fuel up.”

EV advocate organizations support the increase in EV charger infrastructure as means to increase awareness of this technology and its many benefits.

About the California Department of Parks & Recreation

California State Parks provide for the health, inspiration and education of the people of California by helping to preserve the state’s extraordinary biological diversity, protecting its most valued natural and cultural resources, and creating opportunities for high quality outdoor recreation. Learn more at www.parks.ca.gov.

The Los Angeles Department of Water and Power is the nation’s largest municipal utility, serving Los Angeles residents and businesses with reliable water and power service for over 100 years. LADWP is sponsoring an EV drive and Ride event at LA Historic Park as part of the National Drive Electric Week celebration on September 16th.  This event is open to the public and aims to increase interest and adoption of electric vehicles through education and free test drives of the latest EVs. Details at ndewla.org.

About the California Energy Commission

About Adopt a Charger

Adopt a Charger is a 501(c)3 organization that promotes the adoption of electric vehicles by installing EV charging stations at popular destination locations including National Parks, State Parks, museums, and universities.  AAC has partnered with LADWP on installations at The Getty Center, the Getty Villa, The Natural History Museum of LA County, the Los Angeles Zoo, and popular LADOT parking lots. Learn more at adoptacharger.org.