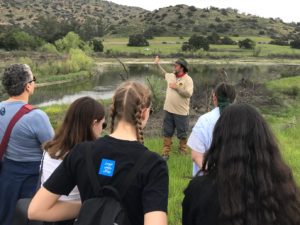 Because the property is closed to the public to preserve habitat on the site, the annual Open House provides a once-a-year opportunity for the public to view wildlife habitat and plants and trees around the Chatsworth Nature Preserve. In addition to more than 18 species of birds seen that day, there was also a legless lizard sighting.

Tour guides provided the public with historical background of the area, as well as facts about the animal and plant life in the preserve. One species of oak tree located on the site, which typically live 200 to 300 years, serve as an important part of Chatsworth Nature Preserve’s ecosystem. These mature oaks provide sapling oaks with moisture, nourishment and protection from the sun while also serving as critical habitat for birds, insects, plants and animals indigenous to the area.

LADWP Director of Water Operation, Anselmo Collins, who served as the Master of Ceremonies for the event, said, “You can tell how much people love the Chatsworth Nature Preserve by the size of the crowds that show up every year to enjoy the trees, the pond and the wildlife. That’s why LADWP works hard to be a good steward of the property to ensure that this unique and valuable space can continue to flourish.”

Sharon Shingai who is an event organizer and director-at-large of the Santa Susana Mountain Park Association, said “We’re thrilled to partner with LADWP on the Chatsworth Earth Day Open House. This event allows more people to experience the beauty of the Nature Preserve and to understand the importance of preserving green spaces and wildlife habitat.”

The LADWP-owned property originally served as the site of a reservoir put into service in 1919 and fed by the San Fernando Reservoir. Because the reservoir dam was built without mechanical compaction of the soil, it was deemed seismically vulnerable and removed from service in 1972. In 1997 the Los Angeles City Council renamed the Chatsworth Reservoir as the Chatsworth Nature Preserve establishing the City’s first and only nature preserve.