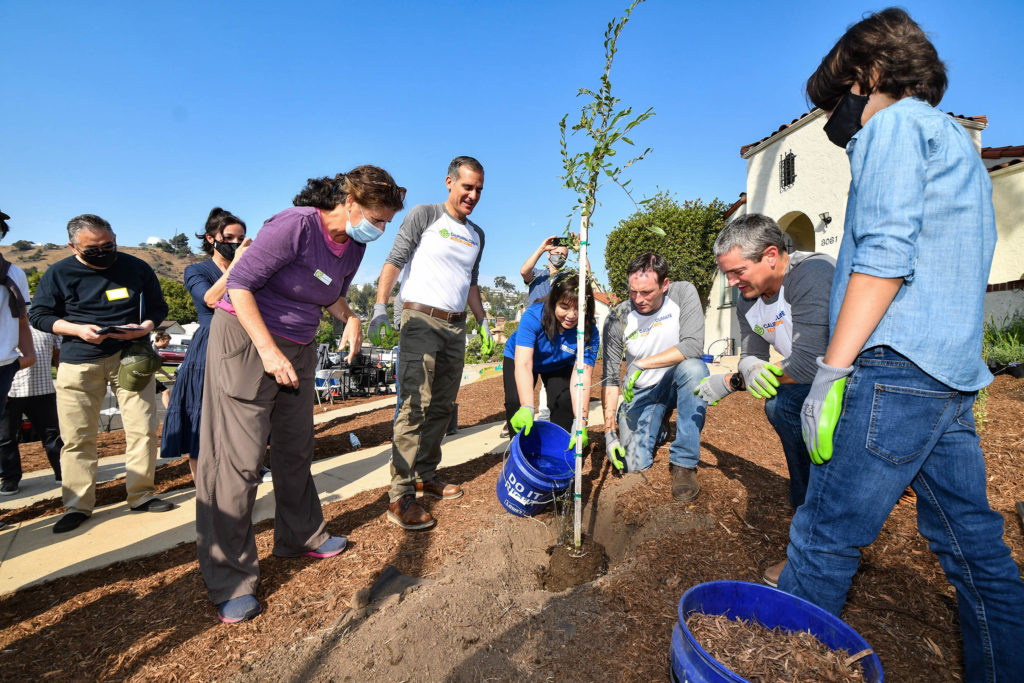 SEPTEMBER 25, 2021 (LOS ANGELES) – Mayor Eric Garcetti today participated in a turf replacement workshop hosted by the Los Angeles Department of Water and Power (LADWP) in partnership with California Volunteers and the California Natural Resources Agency to promote water conservation. In the past decade, this rebate program has helped replace over 51.1 million square feet of turf in Los Angeles with drought-tolerant landscaping, saving enough water to supply 27,500 homes per year.

“Water is our most precious resource — we must take the necessary steps now to conserve, and create a sustainable supply for our children and grandchildren,” said Mayor Garcetti. “When I took office, drought conditions were dire across the state, and I called on Angelenos to reduce our water consumption by 20 percent. We rose to that challenge, and I know we can step up to conserve more as drought grips California again.”

In response to the 2014 drought, Mayor Garcetti signed Executive Directive 5, which set a 20% reduction target by 2017. ED 5 successfully reduced potable water use from 133 to 106 gallons per capita by February 2017. Two years later, Mayor Garcetti announced that the City would recycle 100% of its wastewater for reuse by 2035 at the Hyperion Water Reclamation Plant.

“By recycling and reusing 100% of the City’s wastewater, we will strengthen our local water supply and reduce the impacts of climate change and drought,” said Board of Water and Power Commissioners Vice President, Susana Reyes. “We’re grateful to LADWP customers for being true role models for their ongoing water conservation efforts. Every drop of water we conserve or reuse is water we don’t need to purchase for our customers from the limited supplies available through the State Water Project.”

“Individual actions to conserve water have helped California weather historic droughts. Angelenos in particular have led the way in reducing water use, and over time have achieved remarkable water conservation,” said CA Natural Resources Agency Secretary Wade Crowfoot. “This leadership is required once again. Each of us now needs to play our part conserving water to help our communities through this worsening drought.”

“It is more critical than ever that Californians work together to conserve water,” said California Volunteers Chief Service Officer, Josh Fryday. “Everyone can be a part of the solution. What you do in and around your home including the appliances you install, your water uses, what you plant can make all the difference in making water conservation a California lifestyle.”

Since Mayor Garcetti took office in 2013, the City of Los Angeles has saved around 221.6 billion gallons of water through various water conservation programs and initiatives.