LADWP’s Board of Commissioners approved the renaming of the facility on May 25, 2021 to honor LaBonge who was a long-time supporter of LADWP, and in particular, of the Department’s water system and infrastructure and reliability projects.

“Tom LaBonge felt that Griffith Park was L.A.’s crown jewel, and he brought an incredible amount of energy and passion toward preserving its beauty and well-being,” said Mayor Eric Garcetti. “This may be the single best place in Los Angeles to cherish his legacy, and I can’t help but think that Tom would be proud of our efforts to turn this facility into a place that embodies the principles of sustainability and community that defined his public service.”

In 1978, LaBonge began his public service career with Councilman John Ferraro, an aide to Mayor Richard Riordan and a Councilmember representing District 4. He also worked for a time at the LADWP as Director of Community Relations.

“In Los Angeles – a city with the largest water & electric utility in the country – water has always played an outsized role,” said Councilmember Nithya Raman. “Tom keenly understood this as his legacy reflects. He worked arm in arm with the LADWP, always advocating on behalf of our residents’ needs as well as the needs of our landscapes.”

Known as “Mr. Los Angeles,” LaBonge, a native Angeleno, grew up in the Council District he would later serve as a Councilmember. He left his mark at quintessential LA Landmarks including the Silver Lake Reservoir, Griffith Park, and LADWP’s Aqueduct Centennial Garden in Los Feliz. As part of the Board of Water and Power Commissioners vote in May, the Garden was also renamed as the Tom LaBonge Aqueduct Centennial Garden.

“Tom LaBonge was passionate about LADWP’s history and this dedication rightfully recognizes his contributions to Los Angeles,” said Board of Water and Power President Cynthia McClain-Hill. “His legacy as a dedicated public servant and a cheerleader for the city and its departments will live on in stories that are shared and in the places throughout our city where he left his mark.”

“Seeing his name up there against the reservoir is extremely meaningful to us here at the Department as he was so invested in many of the Department’s projects and particularly, in this project at Headworks,” said Martin Adams, LADWP General Manager and Chief Engineer. “In many ways, Tom’s hard work, compassion, and dedication are emblematic of Angelenos. Naming this facility in his honor puts those values on display in a place that will become a future community gathering place.”

LaBonge was famous for saying throughout his tenure as Councilmember, “Water gives us life!” He was also known for another memorable phrase.

“Dad always said, ‘the two most important things in life are water and relationships.’ That is so true,” said Mary-Cate LaBonge, daughter of Tom LaBonge. “What I learned from dad is to talk to people, ask them questions. Don’t be afraid to raise your hand and speak. Seeing how he made a difference and seeing his name up there is very special to me and my family.”

The banner hung against the wall of the Headworks West will remain there until permanent signage is installed once the reservoir construction and public trails and gardens are completed.

In 2015, Councilmember LaBonge participated in a ribbon-cutting ceremony for the Headworks Reservoir Complex project located in the 4th council district that he represented. The two reservoirs at the complex, Headworks East and Headworks West, replace Silver Lake and Ivanhoe Reservoirs for compliance with Federal drinking water regulations. Headworks is located on a 43-acre site across from the north entrance to the Councilmember’s much-beloved Griffith Park. Public open space atop the reservoirs, which will be partially buried underground following completion of Headworks West, will be designed by Olin Studios and Frank Gehry and Associates. 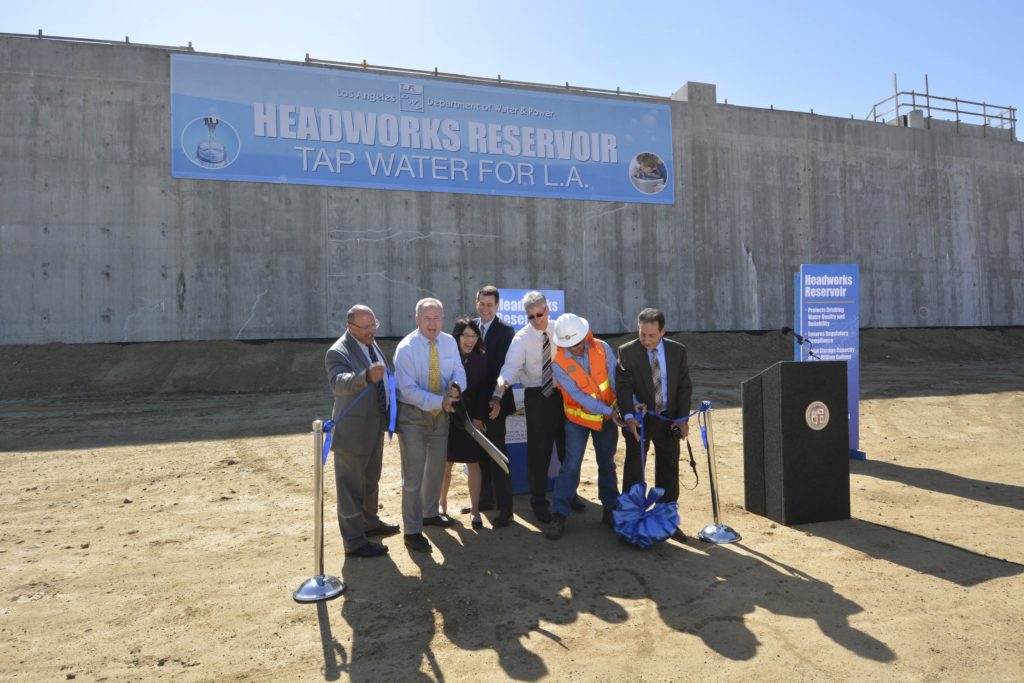 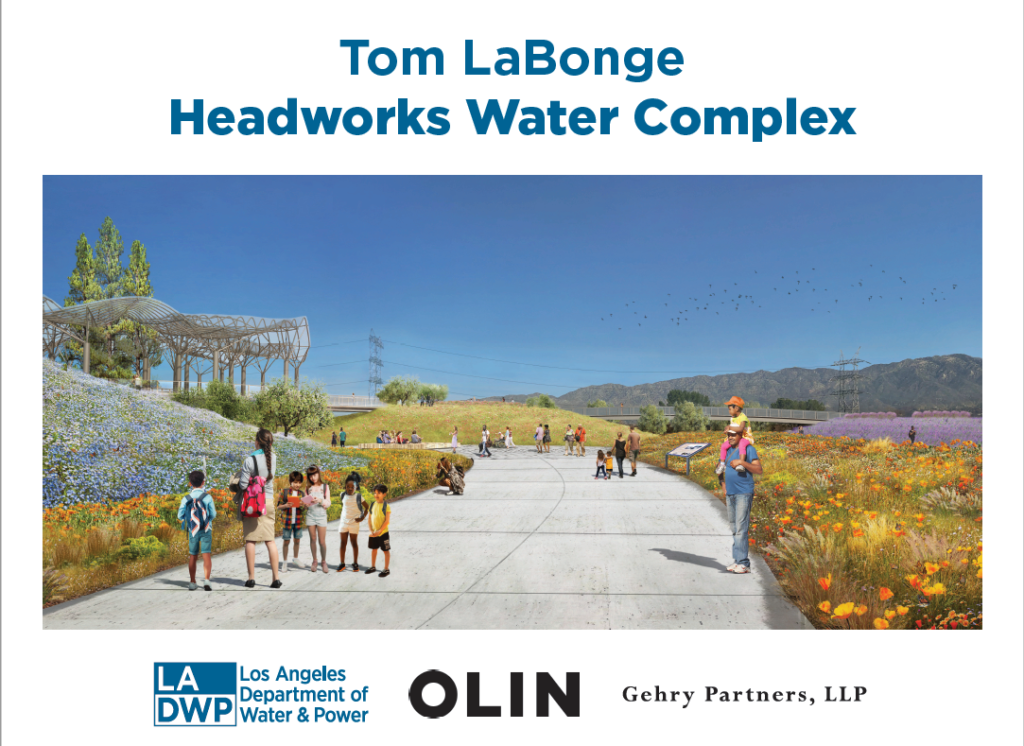 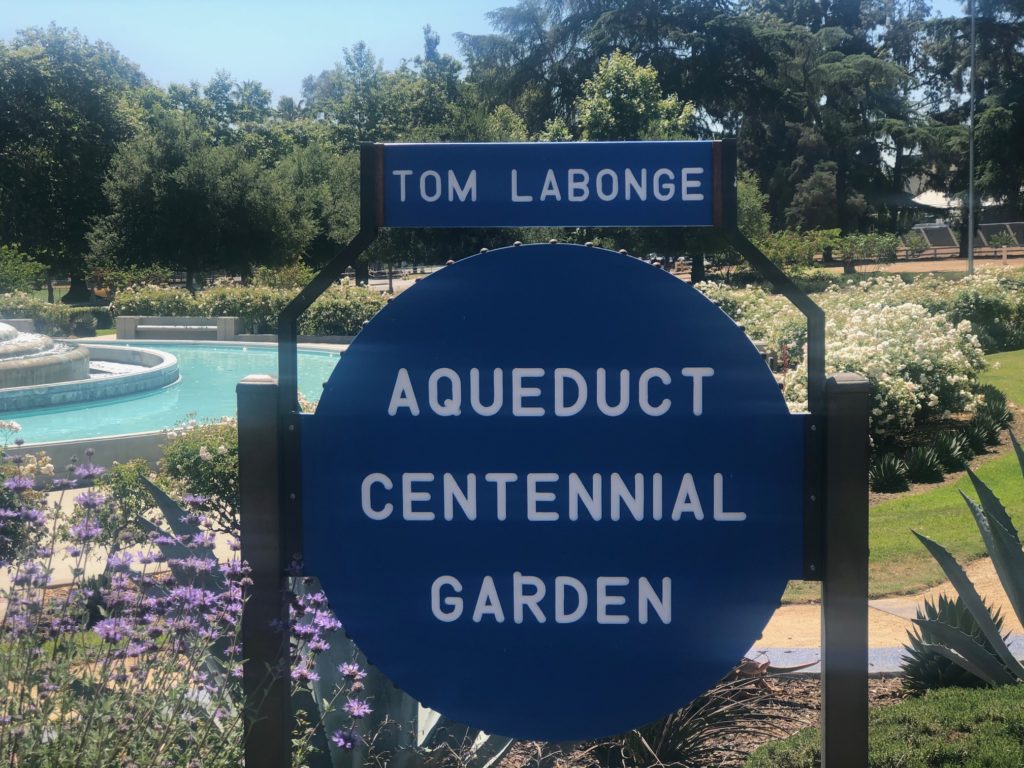