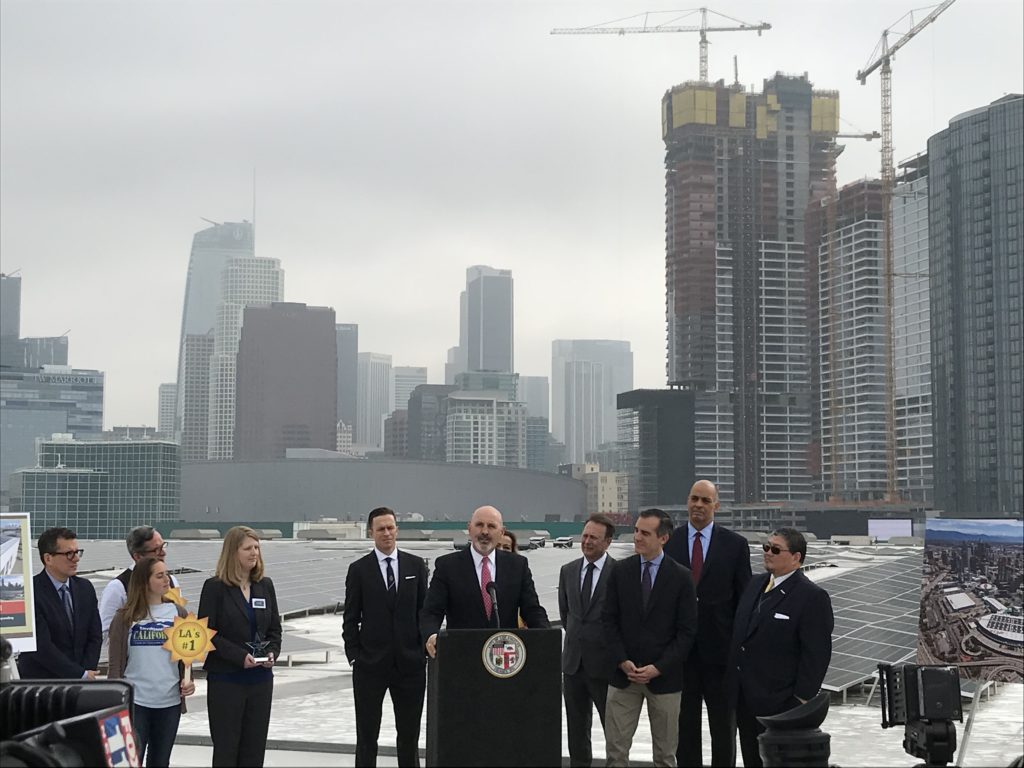 LOS ANGELES (April 4, 2018)— Mayor Eric Garcetti today announced that Los Angeles has the most installed solar power of any city in America after a 44% increase over the last year, according to a report by the Environment California Research & Policy Center. The Mayor also unveiled a new 2.21 megawatt solar installation on the South Hall roof of the Los Angeles Convention Center, making it the largest solar system on any publicly-owned convention center on the West Coast.

“We’re proud to lead American cities in the movement to meet the goals of the Paris Climate Agreement,” said Mayor Garcetti. “Every investment we make in solar is an investment in the health and well-being of Angelenos today and for years to come.”

The new report, Shining Cities 2018: How Smart Local Policies Are Expanding Solar Power in America, shows that Los Angeles now has 349.3 total megawatts of installed local power, which is enough to power 82,500 homes in Los Angeles and save 187,304 metric tons of greenhouse gas emissions — the equivalent of taking 40,108 cars off the road. This rapid progress brings the City closer to meeting several goals outlined in Mayor Garcetti’s Sustainable City pLAn, including a clean and resilient energy supply through the expansion of local solar resources.

“The Shining Cities No. 1 ranking is a testament to the Mayor’s leadership and to the strong interest among the city’s residents and businesses to do their part to achieve a clean power future for Los Angeles,” said LADWP General Manager David H. Wright. “The impressive growth of local solar is also a reflection of the improvements we’ve made to streamline all aspects of the solar programs, making it much easier for customers to go solar and generally improving our responsiveness to customers overall.”

The growth in solar capacity is fueled by two incentive programs and a streamlined permitting process, making it attractive and accessible for Angelenos and local businesses to install solar. The programs have already helped provide more than 32,000 residential and commercial customers with $314 million in incentives.

“Congratulations, Los Angeles. In a city full of stars, it’s the biggest of them all—the sun—that is powering our homes, schools, stores and studios with clean, renewable energy,” said Michelle Kinman, Clean Energy Advocate with Environment California Research & Policy Center. “By continuing to embrace forward-thinking solar policies, L.A. can lead the way to a 100 percent renewable energy future, creating cleaner air and a healthier climate for all.”

The new 2.21 megawatt solar installation on the roof of the Los Angeles Convention Center South Hall was developed by PermaCity, who last summer completed the 16.4 megawatt Westmont Solar Energy Project in San Pedro — the most powerful rooftop solar project in the world.

“PermaCity is honored to be the solar contractor for the Convention Center. We’d like to thank the Mayor, the Convention Center, and LADWP for making this job and so many more possible, and for creating great paying jobs for residents,” said Jonathan Port, PermaCity CEO.  “We also want to thank the Los Angeles Workforce Investment Board (WiB) IBEW Local 18 & Local 11, Roofers Local 36, and Labor Local 300 for providing the workforce to construct our Los Angeles manufactured SolarStrapTM and for interconnecting this complex system.”