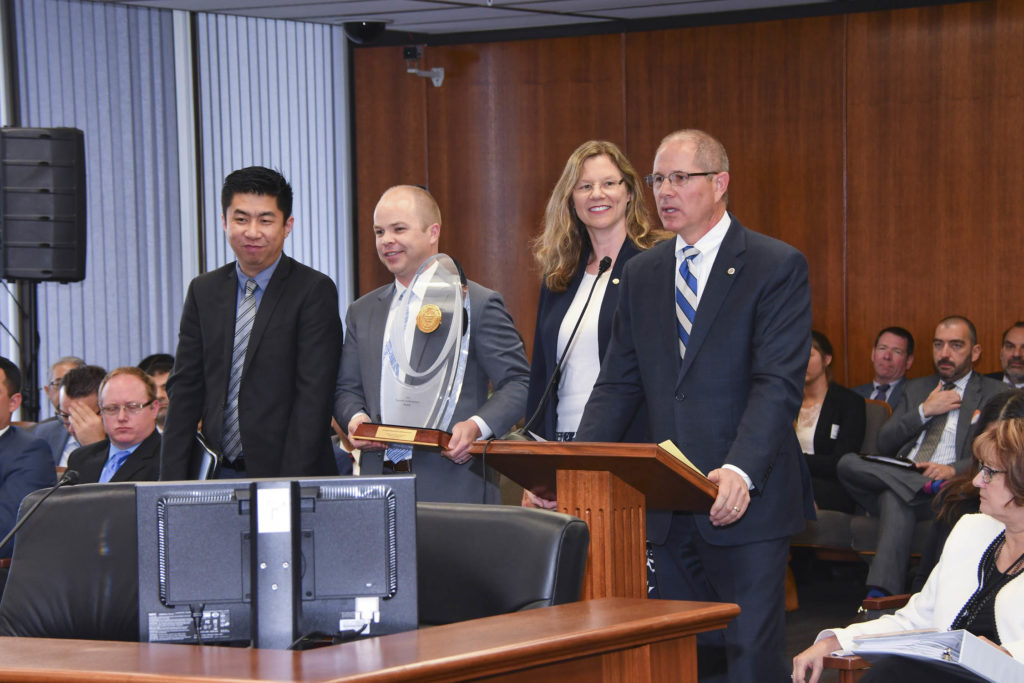 LOS ANGELES (May 23, 2018) – Los Angeles Department of Water and Power (LADWP) recently received the top national prize from the American Academy of Environmental Engineers and Scientist (AAEES) at the annual Excellence in Environmental Engineering and Science™ Awards Competition in Washington, D.C. In all, three of LADWP’s water system projects received four separate awards, including the Superior Achievement Award, the top national honor across all categories recognized at the ceremony. AAEES awards projects throughout the United States that demonstrate leadership and excellence across various categories for environmental stewardship and engineering.

“These awards recognize LADWP’s work to be an example locally, nationally and globally in innovation and sustainability. It is great to be recognized for our efforts as a national leader in the water industry by experts in the field.  Our crews and water system staff are very deserving of these honors” said David H. Wright, LADWP General Manager.

The prestigious Superior Achievement award, scoring highest across all nine competition categories, went to the Water Conservation Potential Study developed by LADWP to help meet the LA Mayor’s ambitious Sustainable City pLAn conservation goals. The study examined how many of the LA’s four million residents have replaced inefficient fixtures with water efficient devices, to arrive at the potential for more water conserving opportunities. The study found there are still many ways our customers can continue to conserve significant amounts of water and identified 45 billion additional gallons of water per year in conservation potential.

“Los Angeles is the first City to undertake a study of this scope and significance and we are proud that respected experts in the field of water have given it national recognition,” said Richard Harasick, Senior Assistant General Manager of the Water System. “This study will serve as a roadmap for LADWP in future conservation efforts.”

The Owens Lake Environmental Protection and Dust Mitigation Program won the top category award, a Grand Prize, in two categories: Environmental Sustainability and Operations & Management. The program was created to address the environmental challenges of the century-old Los Angeles Aqueduct System and to protect the Owens Lake ecosystem. The dust mitigation program has successfully reduced dust by 99 percent on the nearly 50 square-mile dry Owens Lake bed.  It is the largest dust mitigation project in the US. Key accomplishments and goals of the program include improving air quality and reducing public health risks; creating opportunities for social and economic development by enhancing public access and recreation; and educating local residents and visitors about dust mitigation.

The One Water LA 2040 Plan (Plan), a collaborative effort between LA Sanitation and LADWP, won a Grand Prize for the competition’s Planning category. The Plan takes a holistic and collaborative approach to consider all of the City’s water resources from surface water, groundwater, potable water, wastewater, recycled water, dry-weather runoff, and stormwater as “One Water.” Also, the Plan identifies opportunities for multiple agencies to manage water in a more efficient, cost effective, and sustainable manner.

“The One Water LA effort has united the City family to do our collective best to consider every opportunity to further develop local water resources, improve drainage and flood protection, and protect downstream environments from pollution off our streets,” said Martin Adams, COO of LADWP.