LOS ANGELES (October 24, 2017) – Water service reliability has increased in the Mar Vista area and surrounding communities thanks to the rehabilitation of the Grand View Regulator Station by Los Angeles Department of Water and Power (LADWP) crews. The 66 year-old Grand View Regulator Station is one of the first stations to be rehabilitated under LADWP’s five-year $2.4 billion Water Infrastructure Plan, which aims to also replace or upgrade mainline pipes, trunk lines, large valves, pump stations, water meters and in-city reservoirs and water tanks.

Regulator and relief stations control water pressure by automatically adjusting for changes in flow, providing customers with safe water pressure. These installations are vital to LA’s water system and are part of LADWP’s long-term strategy to replace aging infrastructure.  The Grand View Regulator Station project included construction/installation of a total of 15 new regulating and isolation valves along with approximately 150 feet of 6- to 24-inch steel pipe network. Ventilation was also replaced to accommodate the new equipment inside the underground station vault.

“Completion of the Grand View Regulator Station demonstrates LADWP’s commitment to ensuring a reliable water supply for our customers by upgrading and replacing aging infrastructure before it reaches the end of its service life,” said Richard Harasick, Senior Assistant General Manager – Water System. “Our Asset Management Program helps our hard-working crews prioritize efforts across the water system and determine where our resources are needed the most.”

Projects of this scope and magnitude, often located within residential areas or busy thoroughfares, require carefully planned coordination with partner city agencies to minimize disruptions to local residents and motorists. A temporary bypass regulating valve adjacent to the station was installed prior to project commencing to continue supplying water to the neighborhood while the station was down and the construction area was clearly delineated allowing for continued traffic flow. The temporary bypass will remain in service and will provide redundancy for future maintenance.

A total of 350 cubic yards of soil was excavated and a crew of five full-time members and additional five support personnel worked on the project from November 28, 2016 until completion on September 27, 2017. LADWP’s Water System is the nation’s second largest municipal water utility, and serves a population of 4 million people within 473 square miles. It provides approximately 167 billion gallons of water annually and an average of 458 million gallons per day for 681,000 residential and business water service connections. 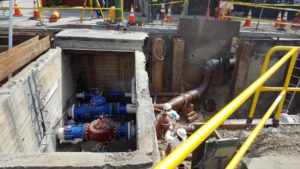