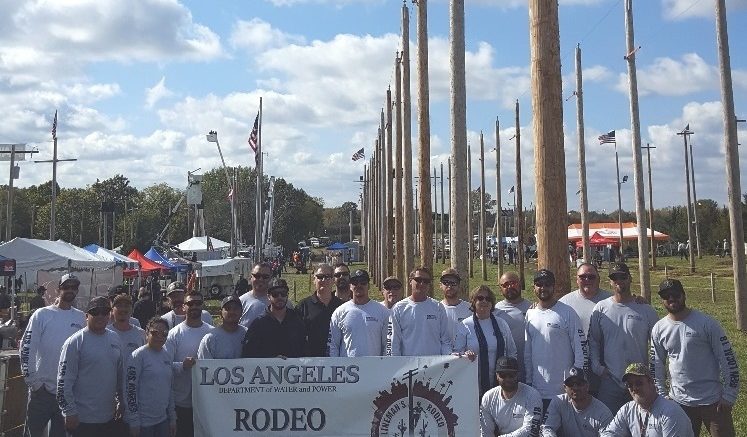 The LADWP/IBEW Local 18 Journeyman team of Thomas Crevier, Chris Hitt, and Justin Carpenter won first place in the Municipality Division and 16th place among all 248 Journeyman teams in the “Best of the Best” category.  LADWP Apprentice David Angrove gave a strong performance as he captured second place in the Municipality Division and sixth place of all 321 Apprentices participating. Angove also placed second in the Hurt Man Rescue competition, second in the Written Test category and ninth place in the Mystery Event.

“Our lineworkers do an outstanding job every year at the international competition, demonstrating they are among the best trained in the world,” said Andrew Kendall, Senior Assistant General Manager of Power System Maintenance, Construction and Operations. “This year we continued an LADWP/IBEW Local 18 tradition of outstanding achievement in safety, training and performance.”

“The best lineworkers in the world compete in these events based on traditional lineman tasks and skills. I am very proud of our teams,” said Reiko Kerr, Senior Assistant General Manager, Power System Engineering, Planning and Technical Services.

Each year since 1984, professional linemen from across the country gather to compete in the International Lineman’s Rodeo. The Lineman’s Rodeo focuses on safe work practices, provide an opportunity for the public to better understand and recognize the skills that lineworkers use in the course of doing their jobs, and to provide an opportunity for these professionals to receive recognition in their trade.

LADWP/IBEW Local 18 linemen participated in the international contest after having competed in the L.A. Lineman’s Rodeo. The 28th annual event, sponsored by LADWP and IBEW Local 18, took place on May 4, 2019 in Sun Valley and brought together linemen from utilities across Southern California and beyond.