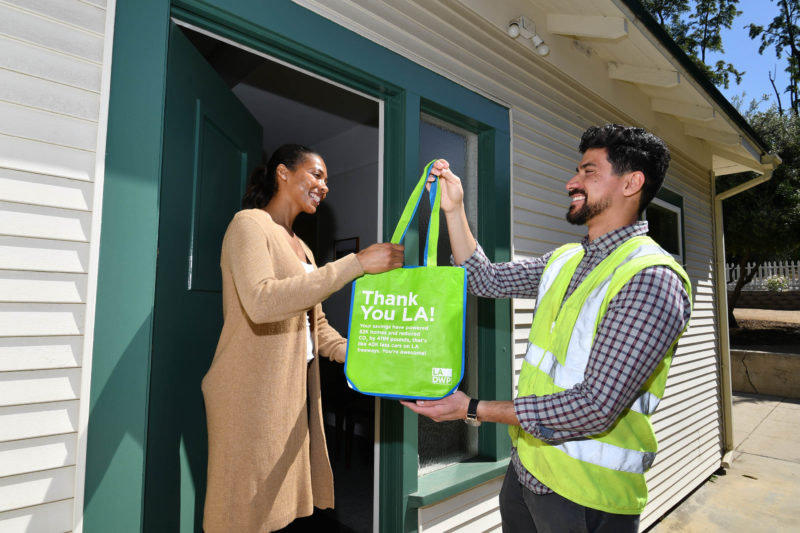 LOS ANGELES (June 17, 2019)–The Los Angeles Department of Water and Power (LADWP) is hitting the pavement once again, to conduct a third door-to-door delivery of free LED bulbs to every one of the 1.4 million residential household in the LADWP service area. The distribution effort kicked off the first week of May. This latest campaign is a repeat of LADWP’s last successful, free LED bulb delivery in June of 2018. Door-to-door delivery will be conducted by neighborhood in a rolling fashion. Each week, several crews will be deployed simultaneously, in different communities to distribute a reusable bag containing two 12-watt LED bulbs to nearly 125,000 homes. The campaign is expected to be completed by July, 2019. Upon completion, 2.8 million free bulbs will have been delivered to all LADWP residential customers.

If LADWP customers replace two 75-watt incandescent bulbs with the two 12-watt LED bulbs, they can expect to save a combined 138 kilowatt-hours annually for the life of the bulbs, estimated to last nearly 23 years. The amount of greenhouse gas emissions avoided by two LEDs over their lifetime–3,174 kilowatt-hours–is equivalent to 2,733 miles driven by an average passenger vehicle. Customers who make the switch can also save up to $476 in electric costs over the lifetime of those two LEDs.

“Not only will this simple change help save the environment, it will also put money back in our customers’ pocketbooks,” said LADWP General Manager David H. Wright. “The LED household distribution program is a cost-effective way to deliver energy efficiency directly to all of LADWP’s residential customers, both in single-family as well as multi-family homes.”

The budget of this round of LED distribution is estimated at $7.9 million. If all of LADWP’s residential customers make the switch, the program is expected to result in 4,410 gigawatt hours (GWh) of energy saved which is equivalent to removing more than 330,000 automobiles off the road annually. The program is expected to save customers a combined $666.4 million over the lifetime of the LED bulbs.

The bulbs are being distributed by LADWP contractor PowerDirect. Employees will have PowerDirect identification and wear yellow vests as they drop off the bags with the LEDs.

In addition to the LED bulb give away, LADWP offers many more ways for residential and commercial customers to save electricity, water and money. Go to www.ladwp.com/save for details on LADWP rebates and conservation programs.