Drinking Water, Portable Showers and Toilets Provided to Residents Without Water Service, while Displaced Residents are Housed at Area Hotel 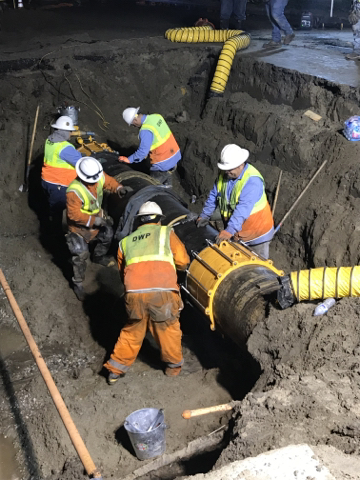 LOS ANGELES (December 22, 2018)- LADWP crews worked overnight and into this morning to repair the damaged  24-inch water main in South Los Angeles on 55th Street between Main Street and Avalon Blvd. Crews cut out the damaged section of pipe and lowered a new pipe into the ground overnight, allowing the Gas Company to complete the replacement of a gas main. This morning, LADWP crews are working to replace a valve as well as performing flushing and water disinfection work to ensure water quality standards are met once the pipe is put back into service for the 75 households currently without water as a result of the main break. The disinfection process takes 48 hours.

For the 47 residents displaced from their homes by the water main break, LADWP arranged lodging and meals Friday night at an area hotel.  Forty-one residents were evacuated from their homes Friday morning and transported to the hotel with additional individuals checking into the hotel later in the evening.  LADWP is working with the City’s Department of Building and Safety to assess the structural safety of homes to determine whether some residents may be able to return home by this evening.

LADWP has staff members stationed at the site of the water main break as well as at the hotel to answer customer questions.

Red Cross continues to be a partner in this effort as we work to meet the needs of affected customers. The Red Cross can be reached at 1 800-675-5799.

LADWP also worked with LAPD, LAFD and the City’s Departments on Disability and Animal Services to support those with special needs as well as those who own pets.​

Additional Background Information:
This water main that failed Friday morning shortly after 5:00 a.m. on 55th Street in South LA was a 24-inch pipe that caused damage to some nearby residences. While the leak was shut down shortly before 9:00 a.m., 47 individuals from the affected households were evacuated from their homes so that the City’s Department of Building and Safety could assess the damage. Four vehicles also sustained serious damage as a result of the water main break.

For information on how affected customers can file a damage claim with LADWP, please visit: www.ladwpnews.com/information-on-how-to-file-a-claim/. 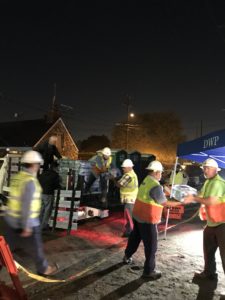