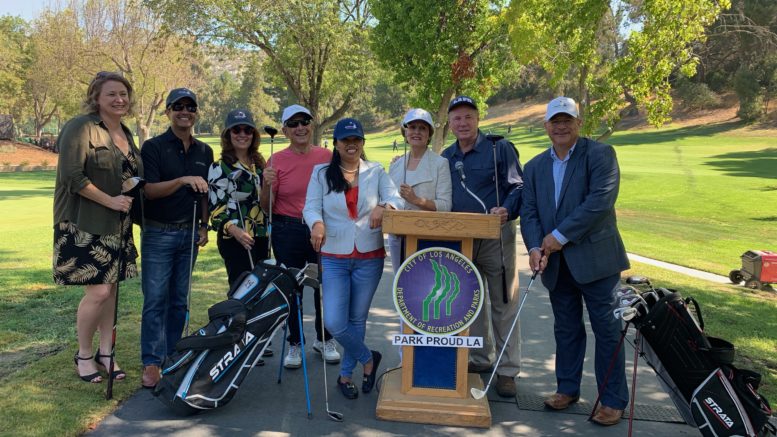 LOS ANGELES (July 12, 2019) – Roosevelt Golf Course, a unique executive 9-hole golf course which touts some of the best views of the City of Los Angeles, can also add water efficiency to its brag list. The City of Los Angeles Department of Recreation and Parks (RAP) and the Los Angeles Department of Water and Power (LADWP) today, celebrated the completion of the Griffith Park Roosevelt Golf Course irrigation retrofit project. The project, which broke ground last September, switches the golf course’s irrigation system from using drinking water to recycled water for its 38 acres of turf. Today’s celebration also commemorates the iconic golf course’s 55th Anniversary and the grand opening of the golf course’s new concessionaire, Franklin Café and Market.

Roosevelt Golf Course is the 8th city golf course to making the switch when it comes to watering its course with recycled water as an effort to conserve drinking water. In total, there are now more than 1,000 acres of city golf course facilities using recycled water for turf irrigation, saving an estimated 690 million gallons of drinking water per year– that’s enough to supply more than 6,300 single family homes in LA.

The irrigation retrofit project was made possible through an ongoing partnership LADWP and Recreation and Parks entered into in 2007 to promote water conservation and sustainable landscaping practices.

“We only meet our goals on climate responsibility and water resiliency when we work together,” said Councilmember David Ryu of the City’s 4th Council District. “That’s what happened at Roosevelt Golf Course. The partnership between LADWP and our Recreation and Parks Department is just one example of how the City of Los Angeles is working to save hundreds of millions of gallons of water every year. I’m proud of this project at Roosevelt Golf Course, and all of the work we’re doing in Griffith Park and across Council District Four to conserve water, reduce emissions, and build a more sustainable Los Angeles.”

A key component of bringing to fruition a new and efficient recycled water irrigation system for Roosevelt Golf Course was completed back in May. LADWP’s Griffith Park South Water Recycling Project (GPSWRP) includes a one-million-gallon capacity tank located at Griffith Park that increases the available supply of recycled water for the golf course and future expansion within Griffith Park by about 120 million gallons of recycled water annually. That amount is enough to offset the drinking water needs of 1,110 households. In addition to the one-million-gallon tank, GPSWRP consists of a new 34.5kv power supply, approximately 7,800 feet of 12-inch diameter pipeline and a pump station. The GPSWRP was selected by the American Society of Civil Engineers as its Outstanding Construction Project of the Year.

“Roosevelt Golf Course is the anchor customer for the Griffith Park South Water Recycling Project,” said LADWP Chief Operating Officer, Marty Adams. “Recreation and Parks replaced the original pipe irrigation system with a new system that is now capable of delivering recycled water to all turf and landscape areas of the golf course. This project is an important part of LADWP’s plan to increase the city’s recycled water system, which is a key strategy for developing a viable water future and protecting the city during droughts.”

Mayor Eric Garcetti’s Green New Deal has a target to recycle 100% of the City’s wastewater by 2035 and source 70% of water locally. City departments are committed to enhancing water efficiency at city facilities and have vowed to work together to identify projects to ultimately create more reliable and sustainable sources of water for the Los Angeles.