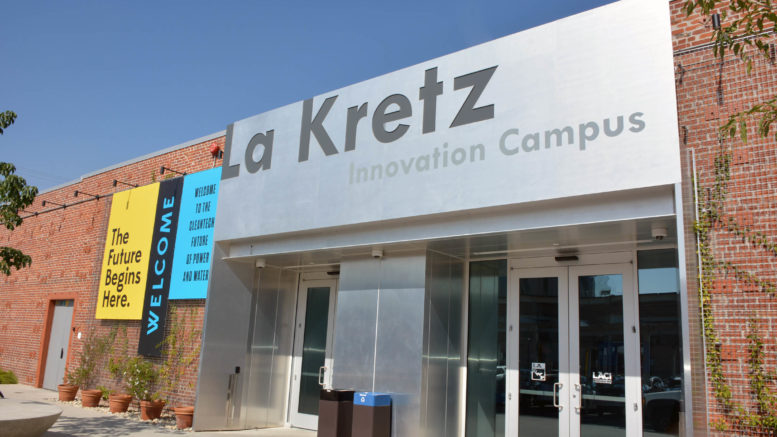 First LADWP Property to Achieve This in the United States

LOS ANGELES (October 10, 2019) – The Los Angeles Department of Water and Power’s (LADWP) La Kretz Innovation Campus, is the first building in the United States to achieve both LEED v3 Platinum in New Construction and WELL v1 Gold Core and Shell certifications. LEED Platinum is the highest achievement for a building according to the United States Green Building Council’s (USGBC) rating system and La Kretz is the first LADWP building to achieve this level.

“At LADWP, we are committed to walking our talk about sustainability, and that includes green buildings,” said Commissioner Cynthia McClain-Hill, Vice President of the Board of Water and Power Commissioners. “Everything that is happening at La Kretz not only makes sense environmentally, but economically as well, and it shows how our customers and partners can be a part of our move toward a clean energy future.”

Located in LA’s Arts District, the fully-renovated campus, managed by the Los Angeles Cleantech Incubator (LACI), is a 60,000 square-foot, one-story brick masonry building that was purchased by LADWP in 2010. LADWP created the space with the purpose of merging science, entrepreneurship, environmentalism and policymaking to advance the development of a sustainable future.  La Kretz was able to achieve LEED platinum status, thanks in large part to state-of-the-art, innovative design features such as the greywater system that provides irrigation for a neighboring park, a microgrid energy solar and battery system, a 175-kilowatt photovoltaic solar canopy, fast charger EV stations and two bioswales.

La Kretz is also the first public building to be WELL certified in Los Angeles. The building was able to achieve WELL Gold due to the facility’s access to LADWP’s quality potable water system, excellent inside air quality and the overall well-being of the building design.

“At LADWP, we are proud to have our sustainability practices extend to not only our customers, but our internal operations as well,” says Chief Sustainability Officer, Nancy Sutley. “By implementing extensive clean energy measures throughout our facilities, we are leading by example to help minimize our environmental impact.”

Additional building amenities at La Kretz include LADWP’s Customer Engagement and Sustainable Living Labs, which features the Case Study Home (a hands-on, simulated home environment where smart home and energy efficient technologies can be tested and evaluated), collaborative workspaces, an advanced prototyping center (including a 3-D printing and laser shop, electronics, robotics, and chemistry labs), a training center, an amphitheater, and an event space.

Furthermore, La Kretz serves as the home for LACI, a non-profit organization that helps cleantech portfolio companies deliver market-ready solutions and spur economic development and job creation in Los Angeles. This synergistic relationship plays a key role in helping achieve City of Los Angeles and LADWP goals to create a clean energy future. LADWP is a key partner of LACI, proudly supporting their groundbreaking work in incubating startups, transforming markets through unprecedented programs like the Transportation Electrification Partnership, and enhancing community with their commitment to diversity and inclusion and workforce development.

To celebrate the LEED and WELL certifications, LADWP and LACI held an unveiling of the designation plaques at the campus during the recent Net Zero Conference & Expo, the world’s largest annual building industry event dedicated to net zero energy, water, waste, and transit.

In addition to the La Kretz Innovation Campus, LADWP remains committed to implementing sustainable measures at all of its facilities, including its downtown LA headquarters, the John Ferraro Building, which proudly accepted the first-ever USGBC Pacific Region Leadership Award for Decarbonization and is LEED Zero as of 2019. Both the LADWP Central Service Center and the Palmetto building, which is primarily used as an administrative office and warehouse space, were both LEED certified earlier this year. Three other buildings under LADWP’s jurisdiction are also pending LEED certification.