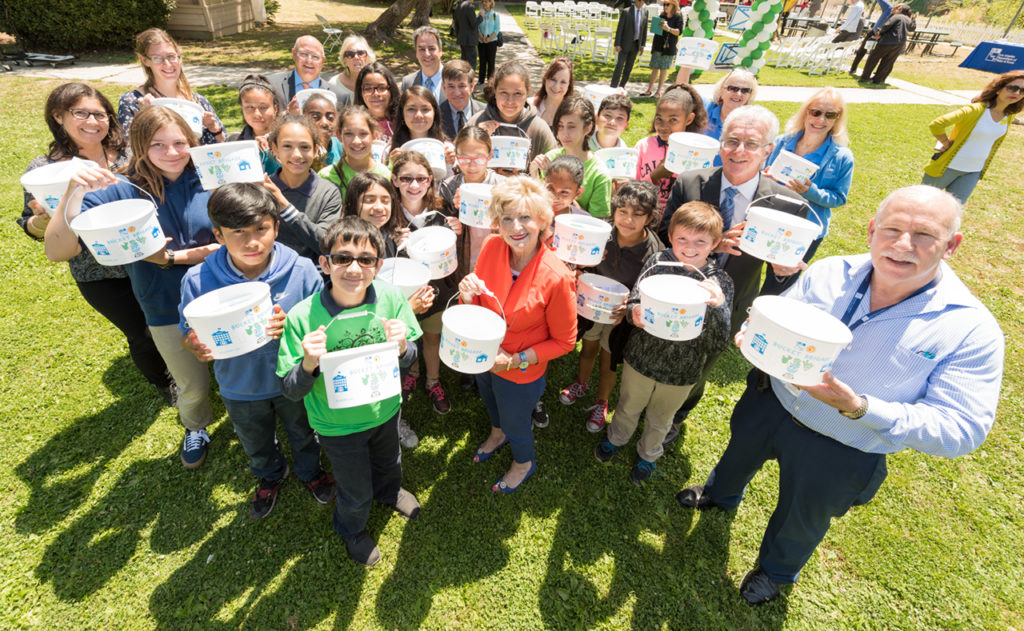 Over the last three academic years, LADWP provided nearly $1-million in rebates to LA Unified for water efficiency retrofits, helping to offset costs of installation and saving the district even more  through reduced water bills. LA Unified was able to reduce its water use by 17 percent from 2014 to 2017 through improvements including the installation of smart irrigation systems; the use of recycled water at five of its campuses to offset the use of drinking water for irrigation purposes; and retrofits for various fixtures on campuses and facilities.

“I applaud Commissioner Jill Banks Barad for her leadership in the Valley Alliance of Neighborhood Councils, which has worked hard to make water use efficiency a priority for the next generation of San Fernando Valley residents,” said Councilmember Paul Krekorian, District 2. “Students, like those at Walter Reed Middle School, have adopted a water conservation lifestyle and are showing us all what sustainability should look like in our neighborhoods and at our schools.”

During today’s event, LADWP distributed a bucket to each student in Walter Reed Middle School’s Environmental Science Academy as an invitation to take on the challenge of water conservation by joining the “Bucket Brigade.” To help spread the message of conservation at home and in their neighborhood, students are encouraged to use the buckets to capture and use any water that might otherwise be diverted down the drain. Students can collect water from their kitchen or bathrooms that can be reused for watering indoor and outdoor plants or for washing the car.  The buckets will also be available to interested Neighborhood Councils to distribute to students in other schools.

“It may seem like a drop in the bucket in our larger efforts to promote water conservation, but when everyone conserves water, it can really add up. Partnering with Neighborhood Councils will help us extend our reach further to involve students in saving even more at home,” said Board of Water and Power Commissioner Jill Banks Barad.

“L.A. Unified’s partnership with LADWP has allowed us to expand our water use efficiency efforts throughout our schools and centers,” said L.A. Unified Board Member Scott M. Schmerelson. “Together, from the 2014 to 2017 school year, the District has saved 447 million gallons of water annually, which translates to approximately $3.7 million in cost avoidance to L.A. Unified’s utilities budget.”

That effort totals 1.34 billion gallons of water saved over the course of three years, enough to supply 12,340 single family homes in LA on an annual basis.

L.A. Unified, with support from LADWP, has also focused on environmental education and engagement strategies to bring awareness to students and neighborhoods. Recently, L.A. Unified hosted a drought awareness contest for students in Grades 1-12 who creatively demonstrated ways to “Save the Drop.” Entries were judged by L.A. Unified Sustainability Initiatives staff and LADWP’s education and water conservation experts. Out of 27 entries, the 6th graders of Walter Reed Middle School’s Environmental Science Academy won the grand prize for their district.

“L.A. Unified is excited about the continued partnership with LADWP,” said L.A. Unified Chief Facilities Executive Mark Hovatter. “Educating our students with programs and contests inspired by the “Bucket Brigade” and “Save the Drop” promotes awareness and calls for a lifestyle that will commit to a greener and more eco-friendly today and tomorrow.”

“As LADWP’s largest water and electric customer, L.A. Unified has made significant steps in conservation of which we all can be very proud,” said Marty Adams, LADWP Chief Operating Officer. “We look forward to our continued collaboration with L.A. Unified to identify future energy and water efficiency opportunities and help the district save water and money.”