A press release issued by the Nevada Policy Research Center (aka Transparent CA) today includes extremely misleading and incomplete information about an LADWP retiree that is used to attract interest in the story and is falsely represented as indicative of the LADWP retirement system.  The information about an Engineering Associate omits key information and the report ignores the fact that LADWP’s retirement system was reformed in 2013.  It also ignores recent findings in a Total Compensation Study completed by the Ratepayer Advocate with an expert third party that found LADWP compensation to be at the median for utilities.

The press release issued by Nevada Policy Research Center (aka Transparent CA) cites the retirement payment of an Engineering Associate who was 87 years old when she retired, having made contributions to the Plan for over 47 years.  Her pension amount was calculated by annuitizing the balance in her account over her life expectancy.  At 87 years old, her remaining life expectancy is much lower than someone retiring at age 55.  Similarly, the balance in her account is much higher at 47 years of service, than someone retiring with 30 years.  Her retirement annuity includes her own contributions to the pension plan over 47 years along with interest like any retirement plan.

LADWP’s pension system was substantially reformed in 2013 and the changes are estimated to save ratepayers approximately $5 billion over 30 years.  New employees hired since January 2014 are part of a pension system with a higher retirement age, reduced retirement formula, increased employee contribution rate, increased time needed to vest, and elimination of the DWP matching employee contributions, as well as suspended reciprocity with the City of Los Angeles.  This pension reform will save ratepayers as LADWP’s rapidly aging workforce retires and new employees are hired.  In fact, nearly 25% of the workforce is now under this new plan.

The new pension system that took effect in 2014, together with LADWP’s median compensation and the fact that LADWP is a publicly-owned utility and makes no profit, helps keep water and electricity rates among the lowest in California. 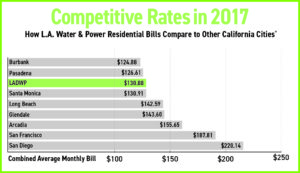