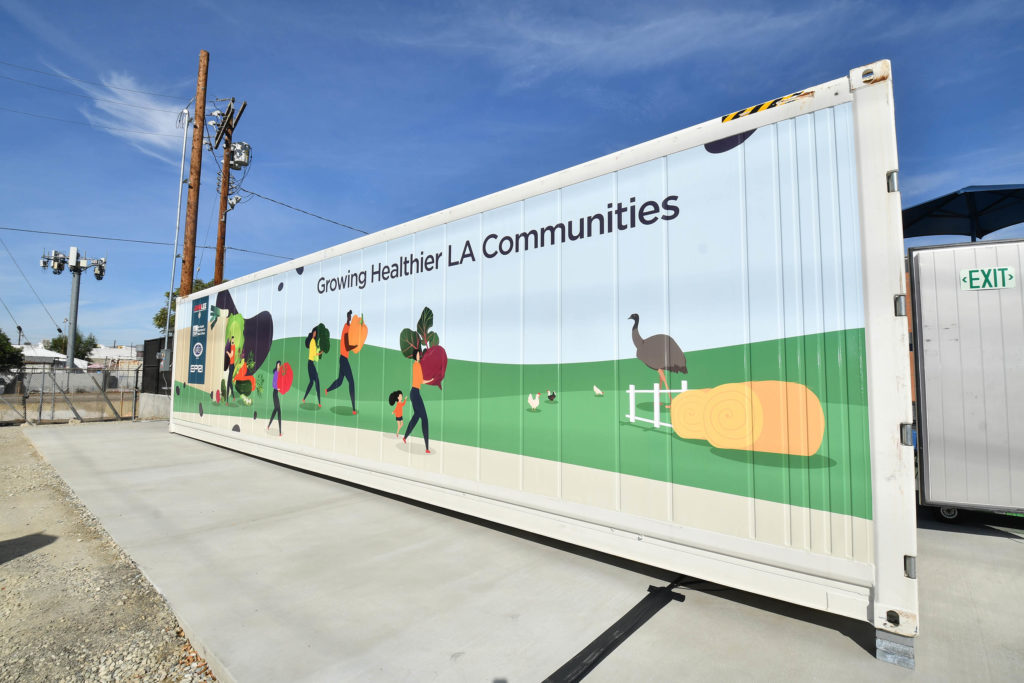 Los Angeles (October 21, 2021) – Los Angeles City 12th District Councilmember John Lee was joined by representatives from Los Angeles Department of Water and Power (LADWP), Electric Power Research Institute (EPRI) and LAPD Devonshire PALS today to unveil a 40-foot, almost 8-ton shipping container that will house an indoor pod farm. Funded by CD12 and LADWP, with the research led by EPRI, the partnership helped transform a shipping container into what will be a water- and energy-saving environment to grow and harvest vegetables year-round in any climate.

“Today we are here to show that cities can be the future of farming, and I cannot think of a better place to bring this vision to reality than right here at LAPD Devonshire PALS – an organization that serves at-risk youth and their families in the San Fernando Valley,” said Councilmember John Lee. “Through this partnership with LADWP and EPRI, this new pilot program will not just make fresh produce available year-round to local residents, but provide our youth the opportunity to learn about innovative and environmentally sustainable solutions to address food production challenges.”

LADWP recognizes that everyone, including customers, employees, elected leaders, and other stakeholders all have a role to play in fostering environmental sustainability. This indoor food production initiative is just one example of how LADWP maintains a leadership role in environmental stewardship and continues to work with the community to build a stronger Los Angeles through innovation and service.

“We are pleased to be a part of this national research pilot with the Electric Power Research Institute, which will help increase access to healthy food in our communities using this low-water, low-energy farming method,” said LADWP General Manager & Chief Engineer Martin L. Adams. “Our participation in this effort further demonstrates LADWP’s commitment to working with our community leaders and partners toward a clean energy future for individuals in every corner of our city.”

LADWP is one of about a dozen utilities nationwide to participate in this two-year study designed to help utilities and the world better understand and engage in indoor food production. Through automated monitoring, researchers at EPRI will be able to evaluate how energy loads, water use, and other controlled parameters vary across different facilities and locations. Other trackable data will also help address questions regarding distribution planning, rate design and larger societal benefits.

While indoor vertical farming, which refers to growing crops in vertically stacked layers, is not new, the more recent innovation of hydroponic farming eliminates all unnecessary components of traditional farming, such as soil and pesticides. Among its many benefits, indoor farming can save up to 95% of water and yields 50% more produce than traditional farming. It is low-energy and uses less water due to its soil-less growing techniques and energy-efficient LED grow lights. It also reduces overall costs and carbon emissions, in line with LADWP’s water and energy saving goals.

The indoor production facility is stationed along LADWP’s transmission right of way in the San Fernando Valley, which is yet another example of how the utility is promoting integrated vegetation management programs. The shipping container specially branded “Growing Healthier LA Communities,” will be maintained by youth volunteers through LAPD Devonshire PALS. Kale will be grown in its first year as it was chosen for its high nutrient value and short harvest cycle. Once harvested, it will be distributed directly to the community and also donated to food rescue organizations.

“We are very excited to be partnering up with Council District 12 and LADWP on a state-of-the art agricultural program that will bring healthy food to our communities and bring education to our children here at our youth center,” said Edgar Sedano, LAPD Devonshire PALS Executive Director.

In addition to this new research project, LADWP has implemented another form of vertical farming at its downtown headquarters, the John Ferraro Building. Last June, through a generous donation by LA Urban Farms, an aeroponic garden was installed as another way to provide sustainable food sources to the community. Similar to indoor vertical farming, aeroponics uses low water and energy.

Sustainability is at the forefront of LADWP’s mission to provide reliable water and power to its customers in an environmentally responsible manner. LADWP is committed to aggressive energy efficiency and water conservation goals of achieving 100% renewable energy and reducing water use by 25% by 2035. Learn more about LADWP’s sustainability programs by visiting www.ladwp.com/greenla. 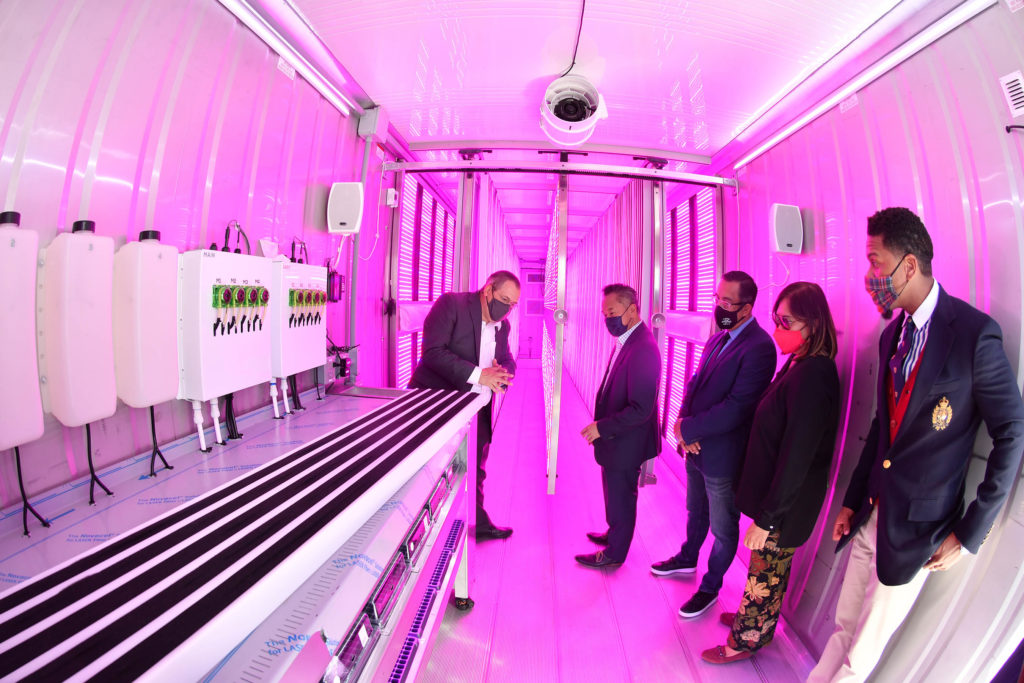 About LADWP
The Los Angeles Department of Water and Power (LADWP) is the nation’s largest municipal utility, with a 8,019 megawatt (MW) electric capacity and serving an average of 435 million gallons of water per day to the 4 million residents of the City of Los Angeles, its businesses and visitors. For more than 100 years, LADWP has provided the city with reliable water and power service in a cost effective and environmentally responsible manner.

About EPRI
The Electric Power Research Institute, Inc. (EPRI, www.epri.com) conducts research and development relating to the generation, delivery and use of electricity for the benefit of the public. An independent, nonprofit organization, EPRI brings together its scientists and engineers as well as experts from academia and industry to help address challenges in electricity, including reliability, efficiency, health, safety and the environment. EPRI’s members represent more than 90 percent of the electricity generated and delivered in the United States, and international participation extends to 40 countries. EPRI’s principal offices and laboratories are in Palo Alto, Calif.; Charlotte, N.C.; Knoxville, Tenn.; and Lenox, Mass. Follow EPRI on Twitter @EPRINews and on LinkedIn.