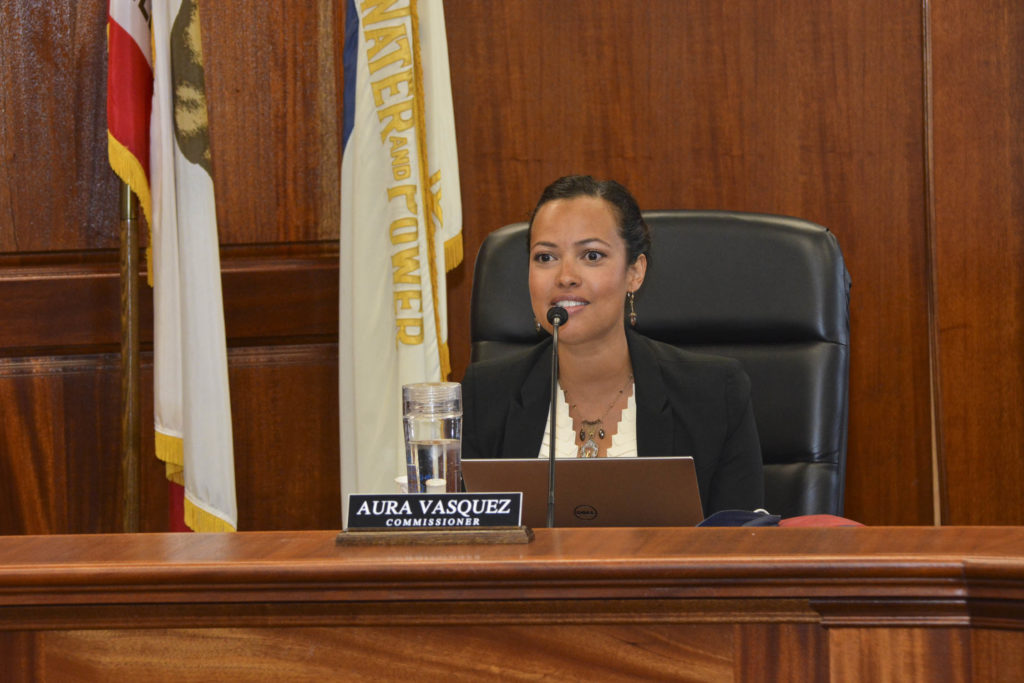 An LADWP Commissioner is offering a new way to connect with your Los Angeles Board of Water and Power Commissioners, which meets regularly on the second and fourth Tuesdays of each month at 10:00 a.m. at the LADWP Headquarters in Downtown LA. Since joining the LADWP Board in May 2017, Commissioner Aura Vasquez established office hours to meet-one-on-one with community members and stakeholders following the second board meeting of each month. She invites anyone interested in meeting with her to schedule an appointment for a one-on-one meeting to discuss anything and everything LADWP.

The youngest commissioner to be seated on any City of Los Angeles Board, Vasquez brings a fresh perspective to her role an LADWP Commissioner citing equity and accessibility among her priorities as a board member. While guiding the largest municipal utility in the U.S., her focus at the Department is bring more equity and sustainable programs to Los Angeles. Her monthly office hours are a reflection of her belief that the listening to community voices helps bridge the gaps in understanding and foster a sense of community.

“Each month, I meet with customers and stakeholders who share their ideas, concerns, criticisms and compliments on the work that we’re doing at LADWP,” says Vasquez. “With each meeting, I feel better informed and inspired to do more as an LADWP Commissioner.”

In 2019, Commissioner Vasquez is hosting her office hours across Los Angeles, visiting different communities each month to reach those who cannot make it to Downtown LA on a weekday.

“I’ve met incredible people through my office hours, and each person’s story is a chance to do something great for our community,” Vasquez adds.

For more information about the LADWP Board, visit www.ladwp.com/board.

Upcoming Office Hours: April 2, 2019 from 4 p.m. to 6 p.m. at the LADWP Van Nuys Customer Service Center, 6550 Van Nuys Boulevard, Van Nuys 91405. Please note that the April 2 office hours are being held on the first Tuesday in April due to the cancellation of the Board Meeting and Office hours originally scheduled for March 26.